Benefits of truck driving simulator according to NAPFTDS Truck driving school. From its focus on truck driving fundamentals to its realistic scenarios and from its low price point to its after-purchase support, Virage Simulation’s truck driving simulator is finding a place with many member schools of the National Association of Publicly Funded Truck Driving Schools (NAPFTDS) organization. At the time of this writing, Virage Simulation had sold truck simulators to five different US colleges that are members of the NAPFTDS. We contacted three of them to share their impressions with us. 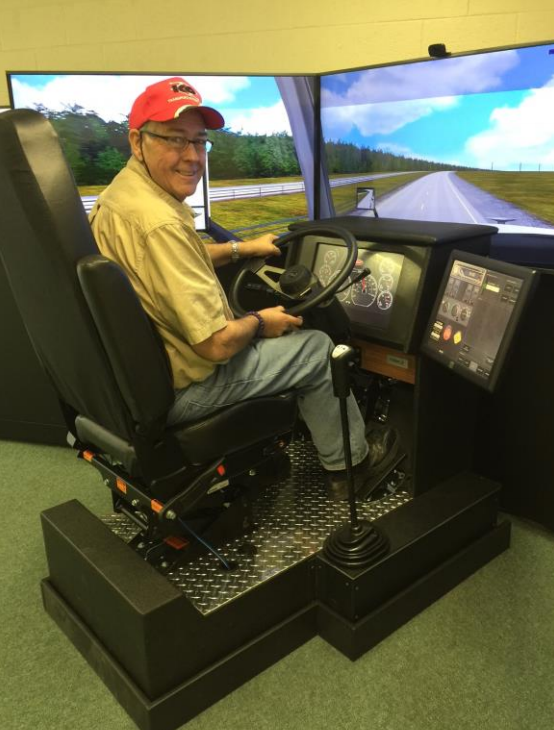 Tom Sarg, (seen in photo), a truck-driving instructor at the Wabash Valley campus of Illinois Eastern Community Colleges, discovered Virage Simulation’s driver training solutions when his college began shopping for truck simulators. He had already taught with another brand of simulator but preferred the Truck Simulator, VS600M by Virage Simulation for its superior realism. After extensive research, his college chose to purchase the Virage Simulation system. Ian Wilson, Program Manager and Instructor at Cuyahoga Community College’s Truck Driving Academy in Euclid, Ohio, had also shopped around for truck simulators and was leaning toward the Virage Simulation product. He decided to visit a nearby college that had recently purchased one from another company. After weighing all the pros and cons, Wilson went back to his first choice, Virage Simulation, for his own college’s needs.

Brandon Rogers, the South Campus Dean at Bates Technical College in Tacoma, Washington, whose five instructors began teaching with the Truck Simulator, VS600M earlier this year, says since then he has shaved off significant initial instruction time. “We run a six-month program and the beginning is where we’re really using simulation. It used to take us two weeks to teach basic techniques for driving a truck. We’ve been able to condense that two-week period into two days on the simulator. It’s been fantastic for us.”

Virage Simulation collaborates closely with its truck driving school clients to develop and deliver the products they need. Almost two dozen Truck Simulator, VS600M have been purchased by two publicly funded truck driving training centers, the CFTR and the CFTC, responsible for training almost all of Quebec’s new CDL drivers. According to Virage Simulation President, Remi Quimper, that working relationship with truck driving training centers and colleges helped the company build and test specific training exercises that accelerate the learning of basic skills, from shifting to backing up to turning at city intersections. According to Quimper, their simulators allow learners to pick up skills more quickly. “Independent university-based researchers found that students can learn shifting skills up to 2 to 2.4 times faster on the Truck Simulator, VS600M than on an actual truck,” he says.

In addition to reducing learning time, other benefits of truck driving simulator include reduction of truck repair costs. Wilson remembers one particular repair bill, the result of a student’s lack of clutch knowledge. The student’s mistake – he put his foot on the brake and then popped the clutch – cost the school $15,000. “He had snapped the drive shaft and took out the transmission.” Rogers is another person happy to see students learning double clutching on a truck simulator before getting on the road. “It’s a much quieter campus because there are a whole lot less grinding of gears going on. That sound is a very expensive sound,” says Rogers, recalling a $10,000 repair bill after a trailer had been badly damaged. Wilson believes a virtual road helps students become better drivers: “They can make mistakes and nobody is going to get hurt.” Many students appreciate their time on the simulator, so much so that several have requested more time on it in order to feel better prepared for their first time on the truck.

Instructors also feel the relief of not having to get into a truck with a student driver who may not be ready. Does Sarg normally worry for his safety when he gets in the rig with a novice driver? “All the time,” he says. “Some of these students think they’re in a little Volkswagen. It’s pretty scary when they make a turn that they shouldn’t and you have to say hey, slow down.” Speaking to us a week after receiving his new simulator, Sarg says learning fundamental skills on a simulator beforehand will translate into less tension between instructor and student in the real truck cab.

The NAPFTDS members praised Virage Simulation for successfully competing with other simulators on price and features. For Rogers, Virage Simulation easily won his college’s bid. “We’re a public agency so we have to adhere to state purchasing guidelines. We requested a bid from a number of vendors and a lot of it comes down to price point. Virage came in at the most economical.”

The college representatives all gave high marks to Virage Simulation’s sales service, noting how they had direct access to company president Quimper, who answered all their questions. And they appreciate the help of Danny Grenier, Director of Product Development & Production, who set up their simulators and trained their staff. Grenier also manages the Virage Simulation team members who provide around-the-clock support. Wilson had to access it when he experienced an incident where the simulator was not working properly. “We identified what it was and let them know. They FedExed a new part and then we FedExed the old part back to them.” Wilson said there were a couple of problems that were fixed remotely. “The beauty of it is they can do it outside of the hours we’re not here.” Those incidents happened in the first three to six months, he recalls, and says there have been no issues since. For Grenier, support is key. “We come from the aviation industry where simulator down time could impact crew scheduling and major loss for the company. We do everything to make our simulator as reliable as possible”. The colleges are also discovering that their truck simulators are opening up other business opportunities. Sarg would like to teach professional drivers how to get better fuel economy and he has been inviting truck companies to sit down to his simulator. “We’re going to have an open house for reps of the companies to use the simulator free of charge and use the Eco Drive program and determine themselves if it would be beneficial for their companies’ drivers to go through the program.” He’s also looking at adding another software component to his simulator in order to give Class B license and training for school bus drivers. Wilson sees in the truck-driving simulator the potential for assessing professional drivers who have had accidents or become complacent, one more benefits of truck driving simulator.