Simply the most realistic simulation! 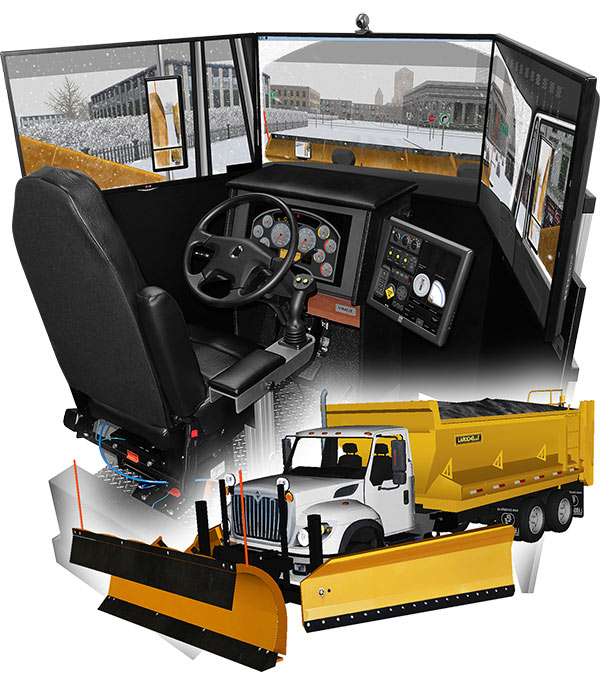 The simulation of the vehicle dynamics of the Snowplow is based on actual data collected in the field to ensure that the driving experience in the simulator feels as realistic as possible. Realism is further enhanced in the Virage Simulation training program through the following features:

The following Snowplow configurations are available and selectable from the operator station:

The controls of the plows are simulated using a standard industrial joystick correctly mounted relative to the driver’s seat. 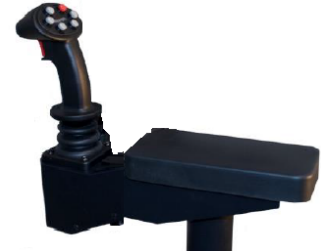 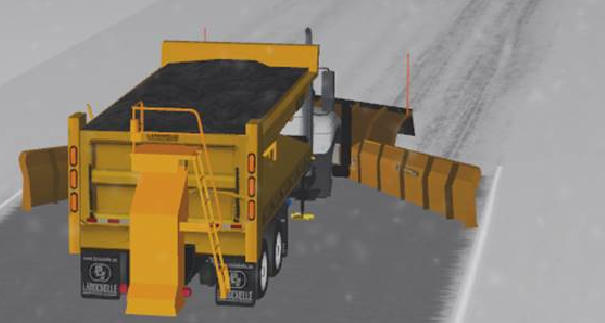 The spreader control is graphically simulated on the touch-sensitive Multi-Function-Display (MFD).

The Highway visual scene is available with different levels of snow accumulation. Below is a screenshot from the VS600M snowplow simulator

Customized scenes are built to support specific training objectives and are used mainly for part-task scenarios with repetitive drills for training procedures such as railroad crossing, U-turns, bridges etc.

The practice field is used to practice basic manoeuvers such as backing up, serpentines etc

The road friction coefficient changes automatically as weather conditions change and can be modified as required.

In addition to the standard library, the following specific Snowplow Training Scenarios are available.

1. Snowplow and Spreader – Basic Controls
Drivers learn to manipulate the front plow, left and right wings as well as the spreader while observing from the cabin or from an external view.

2. Backing Manoeuvers
This Performance-Based Practice (PbP) scenario focuses on backing manoeuvers and allows drivers to progress towards skill mastery at their own pace with minimal instructor supervision. The scenarios provide access to alternate viewpoints, e.g. helicopter views, objective feedback on vehicle position, time and quality of the manoeuver.

3. Snow Plowing – Introduction
The objective of these scenarios is to practice adjusting the plows to avoid obstacles while driving at normal speeds. The driver progresses through a snow-covered “infinite” road bordered by rails, parked vehicles, bridges and railroad tracks. Drivers practice correct plowing procedures and receive feedback on their performance (positioning, collisions). Obstacles are added to the road side so drivers can practice properly adjusting their position and plows. Scenarios are available for city, rural road and freeway.

4. Highway
Drivers practice correct procedures on a highway with challenges, e.g. car disabled on side of road, bridges, overpasses and side rails. At times, visibility significantly reduces forcing drivers to navigate using landmarks.

5. Rural
Drivers practice correct procedures on a rural road with oncoming traffic, cars stuck on the side of the road, cars exiting driveways, garbage bins and oncoming snow plows. Challenges occur when oncoming traffic is timed to approach as the snow plow passes road side obstacles, e.g. cars or garbage bins on the side of the road. At times, visibility significantly reduces forcing drivers to navigate using landmarks.

6. Village
Drivers have to plow a complete section of the village, making turns, cleaning a dead-end, backing etc.

The VS600M truck simulator simulates a typical belly snow plow used in many municipal fleets.  The five modular snow plow-training scenarios in this program include hands-on practice with the basic controls, an introduction to snow plowing, intersections, advanced practice and adverse conditions. 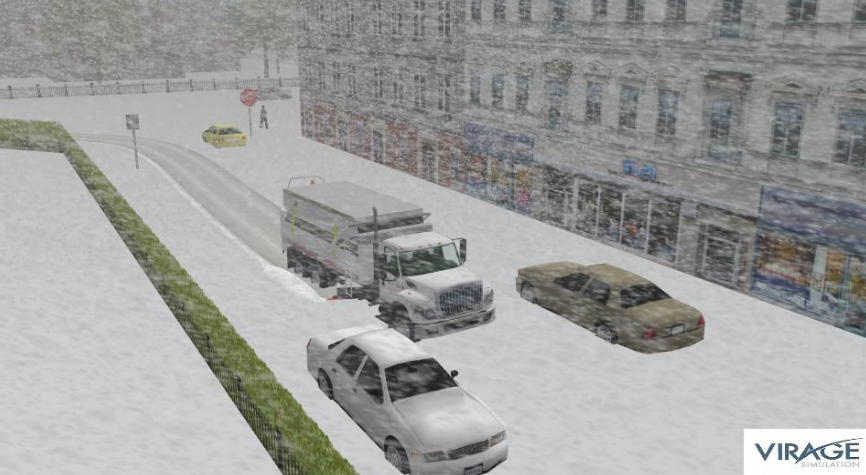