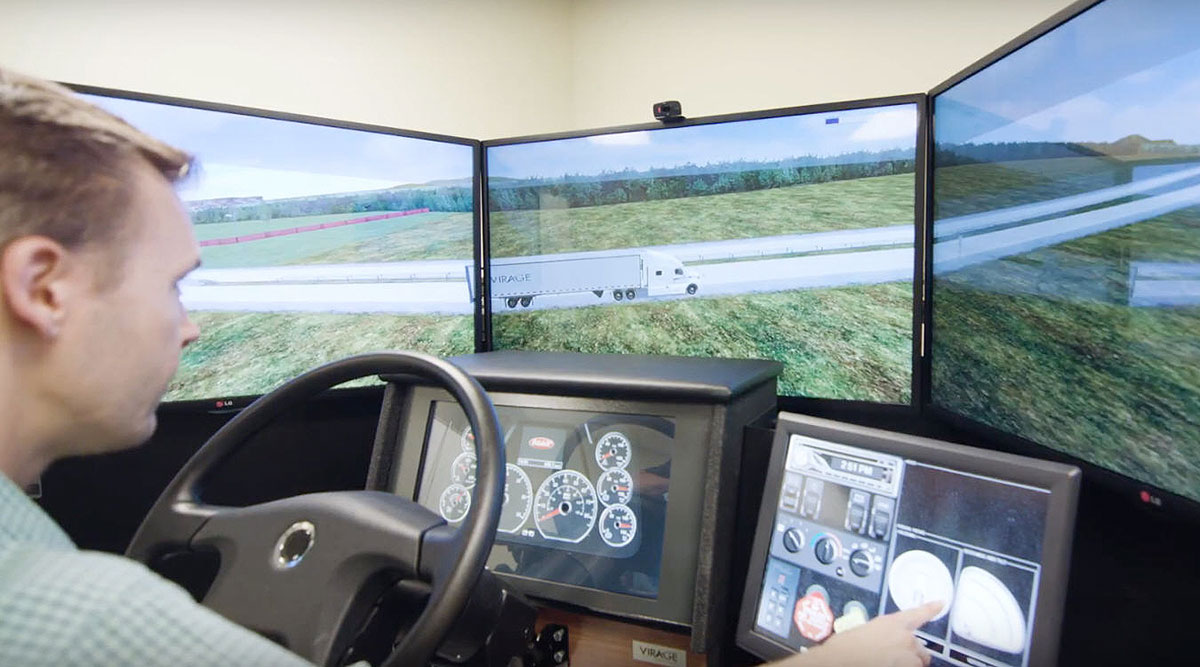 A recent study found that driving simulators can be as effective in training truck drivers as a live teacher for tasks such as braking and shifting gears.

Advocates for the simulators contend the devices are a valuable addition to, but not a replacement for, hands-on training by in-cab teachers.

An award-winning paper on the study covers four 16-week training sessions of novice truck drivers, and focused on the segments on shifting non-synchronized gears and on straight-line and angle backing maneuvers.

The study found that the groups using the simulator were as proficient in straight-line backing and in 45-degree backing as the control groups, and all of the students took about the same amount of time to do the tasks.

In the gear-shifting study, students that used the simulator proved to be as proficient as the group that did only in-truck teacher-led training. In fact, the teacher-only students were slower to reach the proficiency levels of the simulator-trained students, though after a few days both groups were operating at virtually the same level.

“Shifting can be a stressful situation with an instructor watching. The simulator lets the student relax and pay better attention,” said Pierro Hirsch, a co-author of the paper and a program developer for Virage Simulation, a Montreal-based provider of simulators.

The training was conducted at the Center for Transportation Training of Charlesbourg in Quebec.

The paper, “Transfer of Training in Basic Control Skills from a Truck Simulator to a Real Truck,” earned the Best 2017 Paper award from the truck and business safety committee of the Transportation Research Board. The paper was written by researchers from Laval University and the business school HEC Montreal, along with Hirsch.

Not all simulators are the same, though in general they provide a minimum of a 180-degree field of view; graphics software providing a road view and changing weather and traffic patterns; force-loaded steering that gives a feel for different terrain along with events like a blowout; a mix of truck and tractor configurations; and a seat, steering wheel, three pedals and gear shift. The technology allows for recording the student for playback.

Virage offers the VS600M for schools, fleets and carriers and the VS60-S for schools. Other providers include L3 Technologies with the TranSim VS for schools and fleets. Ann Arbor, Mich.-based FAAC Inc. offers the FAAC TT-1000 Truck Driver Training Simulator that provides a 3D experience when using the company software. And Advanced Training Systems of St. Petersburg, Fla., markets the TransMaster Plus.

Several truck driver training programs that have been using driving simulators are fans of the technology, though they also use experienced truck drivers as teachers for a variety of tasks.

“The simulator provided a good introduction, especially for younger drivers,” said Brett Bell, a trainer with Basic Energy Services, a Fort Worth, Texas-based provider of well services to oil and gas drilling companies and operator of 1,620 tractors. “They still need real-world knowledge and skill, and we rely on our driver trainers.”

Basic Energy ranks No. 20 on Transport Topics’ list of the Top 100 private carriers in North America.

Basic also used the simulator to “refresh” its experienced drivers, having them drive in bad weather, react to a sudden animal crossing, and go through a truck rollover — a problem for haulers of heavy liquids.

“Rollovers have gone down since using the simulator, and we’ve seen a lower level of accidents,” said Bell.

Transportation Training Services at Del Mar College in Corpus Christi, Texas, uses the simulator for as much as 20 hours of its 200-hour Commercial Driver’s License course, according to John Rojas, director of the program.

After mastering the simulator, students “understand looking in mirrors, they shift confidently, they coordinate their leg and hand (when shifting),” said Rojas.

Even better, there is no safety concern as there is with a real truck, there’s no wear and tear on a vehicle, and no fuel use, said Rojas.

The school also conducts refresher courses for veteran drivers, some of whom have a “been there, done that” attitude, said Rojas.

“So we put them in the simulator — no one’s hanging on their side — and we test them on distracted driving. We put a phone in the cab, and give them a blowout,” said Rojas.

There are issues with the devices, notes Dan Columbus, vice president of health and safety at Westcan Bulk Transport in Edmonton. Some students can get motion sickness from the moving scenery and the simulator needs an annual maintenance check. But students like the devices and Westcan has found an eco-driving program cuts an average of 30% on fuel costs by teaching techniques on acceleration, idling and coasting.

“Overall we’re glad we have it,” said Columbus. “It’s another tool in the toolbox for training.”